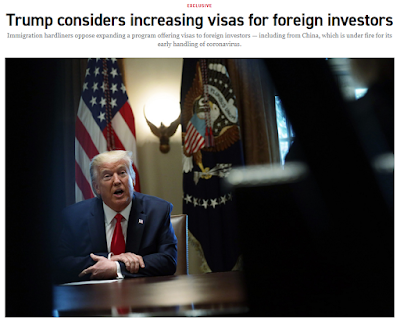 (Source: Politico) The Trump administration is considering a controversial proposal to boost the number of visas offered to wealthy immigrants who invest money in the United States as it tries to boost a faltering economy amid the escalating coronavirus outbreak, according to four people familiar with the situation.

The proposal, which could be included in one of the Senate’s coronavirus rescue bills, would significantly boost the number of visas offered annually from 10,000 to 75,000 while halving the investment required to earn legal residence from $900,000 to $450,000, they say.Half the recipients of the EB-5 visa program — investors and their families — come from China, according to a report by the Brookings Institution think tank. Many others come from South Korea and Taiwan.

Immigration hardliners, who are generally supportive of President Donald Trump’s policies, oppose the proposal because of concerns about increasing the number of foreigners coming to the U.S., especially from China, which Trump blames for its handling of the coronavirus.

“Using a coronavirus package to give more green cards to shady investors from the country where the virus originated would be Washington at its worst,” said RJ Hauman, government relations director at the Federation for American Immigration Reform, who has been in touch with the White House and the Senate about the proposal. “If an immigration proposal doesn’t enhance public safety or protect American workers, it doesn’t belong in there. Period.”

The proposal comes as the Trump administration is putting temporary holds on other types of visas for lower-income immigrants — including agricultural workers, camp counselors and resort workers — as U.S. unemployment is expected to soar.

The administration is also considering reversing its recent decision to increase by 35,000 the number of nonagricultural seasonal workers the U.S. brings in each year, such as landscapers, crab-pickers and lifeguards, two people familiar with the situation say.

The White House did not respond to a request for comment.

Trump made cracking down on immigration the centerpiece of his 2016 campaign and a top priority of his presidency. “Our country is full,” Trump warned in April, standing at the southern border in California.